I’ve started PGP-signing Expirybot’s outgoing emails, but in the process had to build a web service to handle unsubscribes, bounces, complaints and invalid domains. 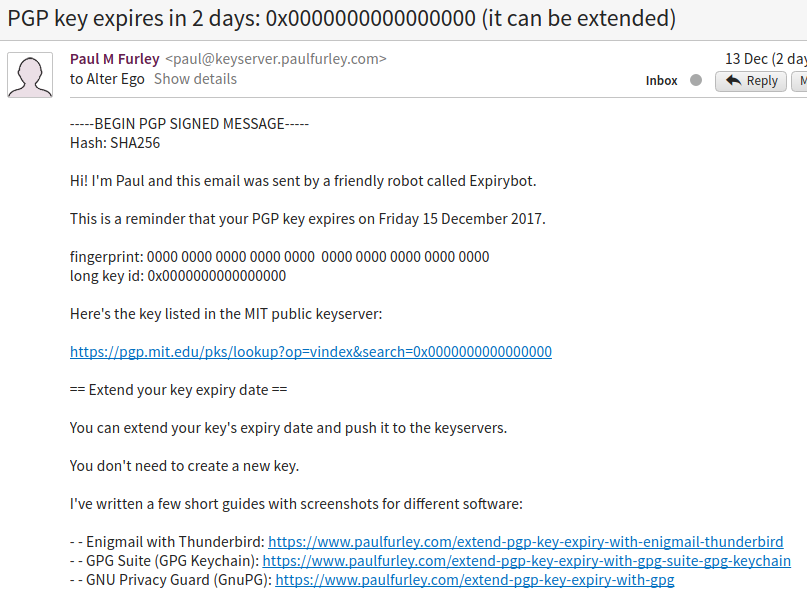 I get a lot of emails back from people who’ve received my PGP expiry notification emails. One of the requests that’s come up several times is,

‘This is PGP, why don’t you encrypt and sign the emails’?

Many people have lost their PGP keys

Encrypting the emails is problematic: given that these are expiry emails, many people I email have lost access to their key, so they wouldn’t be able to decrypt the message. Some people don’t have a clue what PGP is (either their email address was re-used or they forgot). These people tend to be suspicious of the email, although a few people reply and ask what it’s all about, after Googling me. If the emails were encrypted, I’m not sure how those people would react to a scary-sounding subject and an unreadable message body. I decided encrypting expiry emails is probably unwise.

But I should definitely sign the emails. The reason I haven’t been is that I’ve been using Mailgun to send my emails. They offer a very helpful feature where they can automatically add an unsubscribe link to your outgoing emails. This saved me a load of time, since I could just go ahead and send emails and let them handle unsubscribes and suppress any future emails sent to an unsubscribed user.

The problem is, if I sign the emails, it’s difficult for Mailgun to add to my email without it either breaking the signature or it sitting outside the closing -----END PGP SIGNATURE-----. Neither is ideal

Long story short: I did a lot of legwork to implement my own unsubscribe functionality, and now I’m sending GPG-signed emails.

As you can see I’m using inline signatures - where the message body is the signed text - rather than the PGP/MIME format. The reason is that PGP/MIME signed emails appear with an attachment called signature.asc. That’s fine for people who understand PGP, but as I described above, the more suspicious users probably won’t take well to an unfamiliar email attachment.

Automating unattended GPG is quite interesting

I created a new PGP key for Expirybot and I needed to be able to access it from my Python code. That meant there wasn’t a lot of point having a password on the key.

Equally, I wanted to limit the damage of putting a private key sitting on a server, waiting to be stolen someday.

I used the same trick I do on my own key, where I exported the signing subkey - without a password - and let Expirybot use that. The primary key I store safely elsewhere, and in a year I can use it to extend the subkey’s expiration and upload it again.

Knowing that I’d forget how I did it, I scripted the key generation and export. You might find it useful for your own keys - it’s on Github, of course. (Please don’t judge me by Expirybot’s less-than-perfect code which I admit has a lot of technical debt!)

I built a new web service for blacklisting

I made the decision to move away from Mailgun’s unsubscribe functionality and build my own. I’d been resisting this a bit because in order to provide links people can click on, I need to run a new, always-on, internet-facing (simple) web service. I do love running services like this, but until now Expirybot has been a best-effort bunch of shell scripts and Python strung together in cron. If something’s failed it really hasn’t mattered since maybe someone wouldn’t get a reminder email, but so what?

Building a proper web service is actually a great opportunity to do more of the ideas I’ve got for Expirybot which justified spending the time to get it built and deployed.

This is the obvious bit: the link that a user clicks on. I used JSON web tokens (JWT) to create signed links to add some protection against people changing each other’s subscriptions.

Here’s an example of an unsubscribe link:

If you decode the JWT you’ll find it contains this payload:

I wanted to allow mail clients like Gmail and Apple Mail to show those ‘magic’ unsubscribe buttons - making it easier for people to unsubscribe, rather than hitting spam. This is enabled by using the List-Unsubscribe header in the outgoing emails.

There are two forms of List-Unsubscribe: URL and mailto: links. In the mailto version, when the user hits the button, the mail client actually sends an email to the address. This is instant, so it’s preferable to being sent to a website. It’s also safer, since a website could deliver adverts or malware.

For now, I’ve only done the URL link, but I’d like to implement the mailto: version soon too.

In order for Expirybot (which is still cron + shell script + Python) to insert unsubscribe links into emails, it needs to be able to generate the link.

I made a protected API endpoint which Expirybot can call and ask for a link. This endpoint serves a dual-purpose: it also checks that email address and domain against the blacklist. It only returns an unsubscribe link if they’re not unsubscribed, so Expirybot can’t accidentally email someone that it shouldn’t be.

Of course, I needed to import the existing unsubscribe list from Mailgun so I couldn’t email those people who’d previously unsubscribed.

In addition, there were three more things I wanted to import and continue to synchronise with my own service:

I wrote some Python scripts to synchronise these with my own blacklist, and got it running in cron. This is lovely since I now have a ‘single customer view’ (as they call it in big corporations). That is, I can see everything that’s happened for a given email address, and with that I can get a feel for when I’m helping or annoying people.

At the moment the 3-days-until-your-key-expires emails I send are unsolicited.

So far, that seems OK - the ratio of happy users to unsubscribes or complaints is very high.

However, I want to do more with Expirybot, like:

To do this, I feel I need to get their opt-in. The next thing I’m doing for Expirybot is a way for people to ‘sign up’ to monitor they key or email address.

This will be completely free. If it’s something you’re interested in, pop me an email and I’ll sign you up next week when it’s built. And of course, you’ll be able to use my new unsubscribe functionality if you change your mind :)