Here’s a long-overdue write up of an interesting thing I stumbled across back in 2013.

It started with a tweet from Liverpool City Council (since deleted) announcing they would be blocking the websites of payday loans companies in the libraries and other city buildings.

I hadn’t considered that councils would block specific websites in their libraries.

To me this immediately raised concerns. While I personally feel payday loans companies are vile, they are legal businesses. I wanted to know more. There was an article in Liverpool Express (since deleted but I found an archive copy) with a few questions and answers to a councillor.

But payday loan companies are lawful –why should people be prevented from seeing their websites?

"They may be legal – although their activities are to be investigated – but I would argue that the way they operate is certainly not ethical and that is why their sites should be blocked."

Right, so the council will block what it considers to be “unethical”. I wonder what that means?

Who gets to decide? What else is blocked?

To be clear, I believe the council was acting in good faith. I just don’t think they were taking the right approach.

Having been hanging around with mySociety folks for a while, I’d learned about Freedom of Information, and I used their excellent service to make my very first freedom of information request. 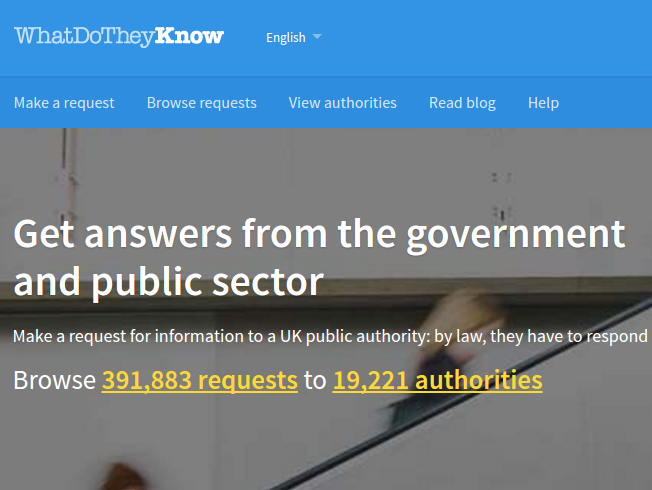 I wanted to know:

After some back and forth, a very helpful man in the council provided me some of what I’d asked for.

There were 30 blocked categories

The blocked categories were:

Straight away looking at this list I’m thinking of problems:

A blocked category relies on someone, or something classifying that site. This is typically outsourced to the company that provides the filtering software, who would typically automate most of the classification process. In other words, a computer makes most of the decisions.

It’s concerning for me how much power we give to these third parties and their proprietary computer systems to control what information we’re allowed to look at.

Most of these were pretty boring - there were a lot of payday loans companies, as promised.

I’ve picked out a few that stood out for me:

Bear in mind that I don’t know when or why these sites were blocked: the council did not provide that information.

You can explore the full list in the spreadsheet provided by the council.

The first request was of limited value because I couldn’t date any of the block requests, and I couldn’t get any of the reasoning behind the blocks. They could have been decades old, which doesn’t give much clue about the context of why they were blocked.

I figured that if I placed another request in a year I would at least be able to see what sites had been added or removed in that time.

30 blocked categories, down with Consumer Protection!

This time there were 30 blocked categories, but they’d changed a little.

I can’t imagine why Consumer Protection would be blocked - weird.

Encouragingly, this time the number of blocked websites had halved.

All of the sites I picked out above were now unblocked.

I’ve picked out a few new blocks since 2014 that I thought were interesting:

Again, the full list is in the 2014 spreadsheet provided by the council.

It’s pretty weird for a local council to be blocking the website of a department of the Ministry of Defence.

Hopefully this post highlights some of the moral questions raised when censoring the internet.